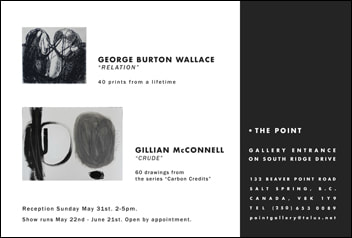 The George Wallace / Gillian McConnell exhibit at The Point Gallery is an experience of both a long and a short journey in black and white. It’s also a reminder that there’s no separation between art and life.

Born in South County, Dublin, George Wallace was a professor of Fine Arts at McMaster University, Hamilton, Ontario for many years. Primarily a print maker and also a sculptor,14 etchings from St. Austell Revisited were purchased in 2011 for the permanent collection of the National Gallery, Ottawa.

George Wallace’s Relation in the upper gallery is sparked by his love of texture. In 1954 he began drawing the St. Austell china clay pits in Cornwall. Fascinated  by this extraordinary landscape, he drew the gigantic pits, huge cones of white silica and gleaming settling ponds, a capricious environment constantly worked by men. St. Austell’s contorted horizon continued to resonate in Wallace’s work for the next fifty years.

His first drawings of the actual clay pits evolved into potent etchings of shapes and textures he found there. Following these robust etchings, he began to simplify his interpretations of St. Austell. This resulted in abstract cubist landscapes that resonate with primal energy.

St. Austell was a challenging but not an easy landscape. Wallace’s figurative etchings are filled with social tension. With an unflinching eye, he draws rude people sticking out their tongues, he portrays the flagrant, the capricious, the obstinate caught in situation. St. Austell’s tortured horizon is evident behind the figurative work.

Wallace’s forty prints from a lifetime of art come from a deep human place and ultimately belong to what has always existed.

Salt Spring artist Gillian McConnell’s CRUDE in the downstairs gallery documents a five month journey. It comprises sixty paintings, the genesis of Carbon Credits. CRUDE refers to unrefined oil and spontaneous unrefined paintings. These dated, sequentially numbered paintings were impelled by the need for creative release despite time constraints. The need for spontaneity determined the black and white pigments and intuitive abstract imagery.

Gillian’s exhibition comprises the first and last ten paintings of 100 CRUDE and a selection of 40 works documenting her journey. Her physical involvement is evident as the paintings move forward with confidence and fluency. The paintings are open and strident, filled with questions.